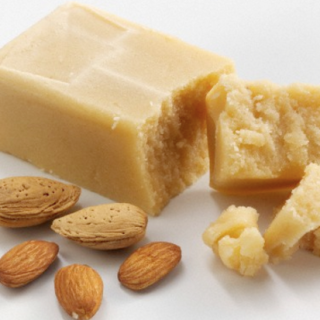 In the Netherlands, almond paste (called 'amandelspijs' in Dutch) is primarily used in speculaas cake (click for recipe here).

Almond paste is also used in the Netherlands as filling in fruited Christmas and Easter breads ('Kerststol', 'Paas brood').

According to Wikipedia almond paste is used as a filling in pastries in many different cultures.

In Scandinavia almond paste is used extensively, in various pastries and cookies.

In Sweden (where it is known as mandelmassa) it is used in biscuits, muffins and buns and as a filling in the traditional spring season pastry semla and is used in Easter and Christmas sweets.

In Denmark (where it is known as marcipan or mandelmasse), almond paste is used in several pastries, for example as a filling in the Danish traditional pastry kringle.

What follows is an overview of the ingredients that I used to make the vandotsch speculaas spice almond paste, including:

Grind the almonds, sugar, vandotsch speculaas spice mix, some water and lemon juice in a food processor (one that is capable of grinding nuts without becoming overheated) until you have a smooth but firm paste, not too wet and not too dry. Push the mixture occasionally down so everything rotates properly

Tip: do not use immediately after making but store away in the fridge for a few days, it will only get better as the ingredients blend together over time (make a batch, split it up and freeze for later use)

For the almond paste to become smoother and easier to work with, take out of the fridge and when at room temperature, knead some beaten egg through it

For instance add between 1/4 and 1/2 of a small egg for every 150 g of almond paste, depending on the dryness and firmness of the paste. Make sure to add the egg in stages, until you reach the consistency you want

Adding the egg at this late stage is for obvious reasons of freshness. You can also use just egg yolk and add some butter to the paste to make it even richer and smoother.